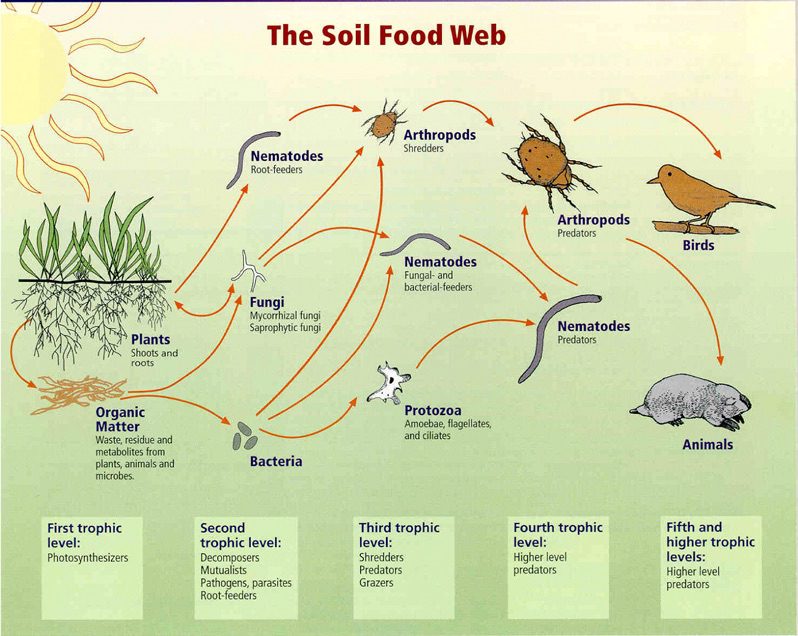 What is the Soil Food Web?

The soil food web encompasses a community of organisms that make up a large component of soil mass. They are what gives soil life and structure. It is a complex living system that not only is the soil but also habitat for a plethora of microscopic and macroscopic animals from bacteria and fungi to earthworms and rodents on up.

The Food Web describes the diverse predator vs prey relationship that exists in nature better than the traditional linear food chain model due to the vast potential pathways that exist. Eventually, every predator becomes prey when they die and are consumed by the soil as the cycle repeats itself. The beginning and end of this cycle always involves bacteria and fungi as they are the constant which makes the food web possible.

Plants are part of this equation and have made the food web even more diverse as bacteria and fungi have evolved with them in a symbiotic relationship that benefits both in an exchange of nutrients. Plants utilize sunlight and transform it into a variety of sugars and compounds that many animals utilize including bacteria and fungi. These two beneficial microbes have the ability to mine the rock particles of sand, silt and clay and extract the minerals that are needed for plant growth. Bacteria and fungi grow exponentially fast in numbers when plants provide exudates from the roots and leaf surfaces. Genus of plant attracts genius of microbe.

The growth attracts predators to the area as bacteria and fungi become food for a vast diversity of beneficial microarthropods, nematodes, and protozoa. This process begins the cycle and releases mineral rich nitrogenous excrement, or poop, at the root zone that is specific for the plant based on the sugars the plant produces. This is nutrient cycling and it cannot occur without the predators that consume bacteria or fungi. Those predators then become prey and are consumed by larger organisms. This balances the system so that one group does not get completely wiped out.

This phenomenon is observable throughout the animal kingdom. In the soil, it is a diverse and complex process. Every organism in the soil food web has a role and the system cannot function if every role is not occupied. The food web ends with humans as we are the stewards of the earth. It is our job to manage this system and correct imbalances that occur. Too many or not enough predators can cause disease within the system. For example, too many mice, moles or rabbits means there are not enough snakes, cats, owls, hawks, coyotes or dogs on the farm. They are all part of the food web and must be considered vital in the proper balance.

Learn About the Biology of the
Soil Food Web

We utilize the process designated by Dr. Elaine Ingham to assess the diversity of the microorganisms present in our client's soil. In doing so, we can we can identify which microorganism groups are lacking and then develop specific strategies designed to support the emergence of a holistic and functioning soil food web. 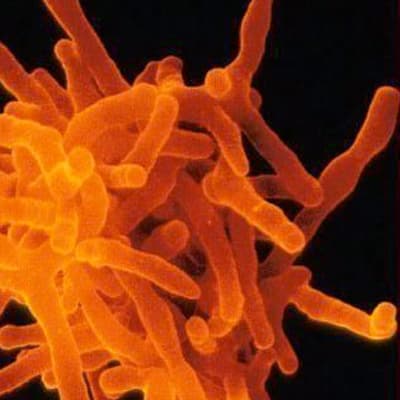 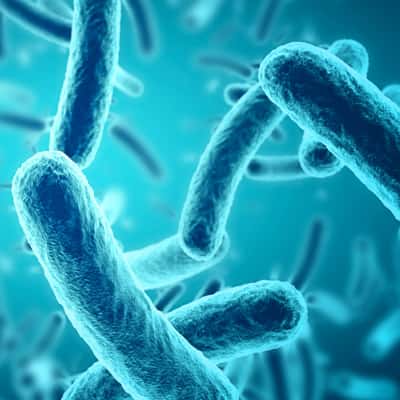 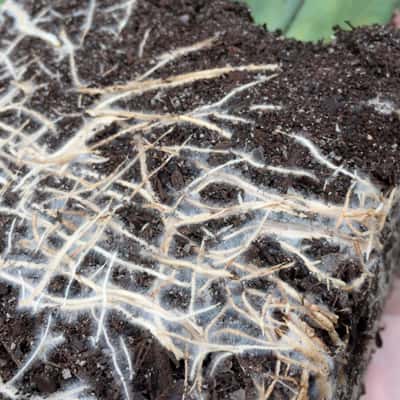 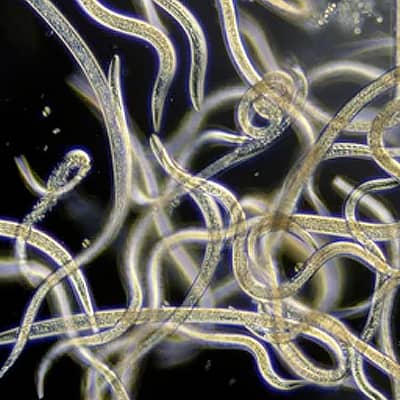 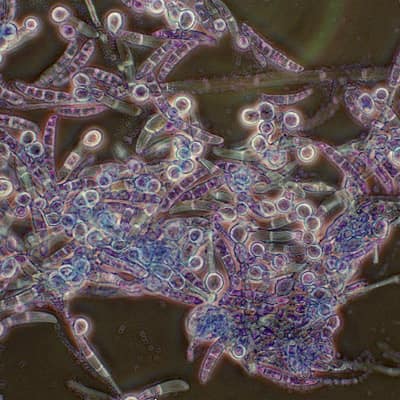 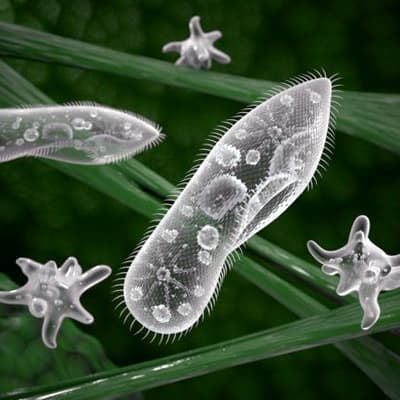 Why Is the Soil Food Web Relevant to Farms?

The Soil Food Web is ideal for farms because it allows farmers to minimize inputs and maximize yields. Weeds are often a concern for farmers, yet weeds are early successional plants and don’t thrive in soils with balanced fugal populations. Fungi don’t produce the type of nitrogen that weeds thrive on. So weed control becomes less of a problem over time as the biology establishes. Also, a proper Soil Food Web will provide all the nutrients the plant needs and the biology present on the leaf surfaces and around the roots will prevent pathogens from gaining access to the plant. The Soil Food Web eliminates the need for expensive chemical inputs.

Dr. Ingham is the founder of the Soil Food Web school and a pioneer in the field of soil biology. She brought to light the use of the microscope in soil science decades ago and it is still the foundation of understanding the life in the soil to this day.

What is Soil Food Web Analysis?

A Soil Food Web analysis uses the microscope shadowing technique to look at an aqueous dilution of a gram of soil or compost. The observations of multiple fields of view, with the microscope, will reveal data about the sample that can be quantified. Calculating the total number of all the organisms in the sample can help determine the health of your soil. Pathogenic as well as beneficial organisms are quantified so that the true conditions can be revealed. It is really difficult to know what is happening in your soil until you look at the numbers.

What are BioComplete™ Soil Amendments?

Solid or liquid amendments that contain a complete living food web for any soil type.

What is soil nutrient cycling?

The Soil Food Web is an elaborate process of predator vs prey starting with fungi and bacteria who break down organic matter and rock particles for sustenance. These organisms then become food for larger organisms who become food for larger and larger organisms. This is nutrient cycling also known as the “poop loop”. The poop released from predators is a nitrogen and mineral rich excrement that is released every second of every day right at the root base for the plant to take up. Nutrient cycling requires the predators that eat bacteria and fungi to be present in the soil or nutrient cycling will not occur.

What is Soil Food Web Testing?

Taking a random sampling of the medium in question and viewing it under the microscope to determine what organisms are present. This can be complicated since farm land often has areas that are not uniform. Sometimes certain areas need more specific observation than others. However, if the arable land is generally uniform then 3 random samples are usually representative of the whole.

What Does a Soil Food Web Consultant Do?

Consultants help guide compost producers or farmers in the right direction by actually looking at the soil biology in real time using a microscope. Taking a soil sample is always the first step. Land management and assessment is the next step.

There are many things that can be done to start moving in the right direction without a microscope analysis of the soil, but the best way to establish a baseline and measure progress is with microscopy. We have to know what is actually happening in the soil right away so immediate changes can be made rather than wait and see. We can determine if progress is being made during a growing season.

Often the transition from conventional farming can be a steep learning curve as changing the ways things have always been done in the past can be difficult. The consultant is there to guide you through this process and give guidelines to follow into the future with the goal that the farm becomes self-sustainable by letting nature do the work.

Yes. Any farm that is using conventional farming techniques is not maximizing their worth. Even organic farms or market gardens often use practices that are damaging to the Soil Food Web. Any farm can benefit from a consult. It doesn’t hurt to take a look. Your farm might not be meeting its full potential. Farms that utilize the Soil Food Web are more profitable, better for the environment and better for all of humanity.

An optimal Soil Food Web present in the soil, from the time of germination to the time of harvest, will ensure that the individual plant has had every opportunity to maximize the uptake of all the essential nutrients for growth, provided nutrient cycling is taking place in the soil. This translates into not only increased crop yields but better tasting crops.

Learn How We Can Help Your Soil Maximize Crop Yields, Naturally.

We use cookies to ensure that we give you the best experience on our website while complying with GDPR & CCPA. If you continue to use this site, we will assume that you are okay with this.AcceptPrivacy Policy